The first question asked on every Grouper is always the same, “is this your first Grouper?”

For those who have yet to come across the company, Grouper is a ‘social club’ (non-marketing speak: a dating-themed start-up.) The concept is fairly simple: Grouper pairs a guy and girl together, each of them bring two wingmen/women, and voila…you have a group date.

Millennials, as I’m told from frequent exploratory pieces on our generation, are coming of age in a 21st century America defined by its hyper self-aware culture. What we might lack in experience and perspective, we make up for in the frequency of our self-centered observational posts (like this one.)

Millennials rush to project and discuss our fears, anxieties, and realizations in often-public forums. People will say that we post, blog, and tweet solely to receive hearts, likes, and comments. This is missing the point.

We project our issues so that, like any generation before us, we know that our insecurities and uncertainties are shared with others. We discuss hoping to find answers and community, not merely searching for likes.

This in mind, I’ve often pondered why so many of my friends have tried Grouper. How did this company manage to convince so many hyperly self-aware 20-somethings that their site was filled with social, smart, relatively good looking individuals…and that they should join and bring their friends along for the ride?

After thinking about this for a minute too long, I realized that we joined Grouper because others were doing it. This isn’t to say that my friends rushed to join because “all the cool kids were doing it” and they possessed an intense fear of missing out, but that the site structured itself in a way that alleviated the normal anxieties a 20-something might have about online dating.

On a Grouper, you go with friends: ‘wingmen/women.’ This provides immediate comfort. My friends are doing this, therefore it can’t be sketchy.

On a Grouper, you’re meeting people, in a city, for a drink. Isn’t this what everyone did on all those television shows we watched growing up? Even if our apartments aren’t the size of those in Friends, we can at least pretend we’ll move to the large city and meet wonderful people and have a wonderful social life.

And so, once you’ve been convinced to join Grouper, the first question brought up on the date is inevitably some variation of: “have you gone on a Grouper before?”

The question is posed because as 20-somethings we seem to want confirmation that we’re all in this funny group date thing together.

There’s another potential motivator for that question: we are terrible at small talk and live conversation. We would rather text or gchat than pick up a phone. We fall back on safe topics: the weather and what we’re both doing at that moment.

So, without further adieu, a brief snapshot of the three Groupers I’ve gone on and the topics of conversation beyond, “So, have you done this before?”: 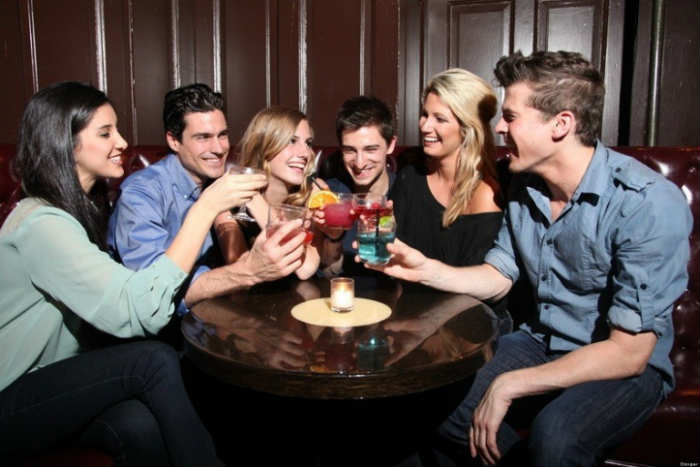 Setting/Situation: I went with two friends from college, TJ and Luke. Met three Arizona graduates at a Lincoln Park bar/restaurant. Immediately realized that: a) it was more of a restaurant—with a great brunch menu—than bar and b) that TJ had mutual friends in common with one of the women.

Topic of conversation: First kisses. After a bunch of small talk—what do you do for a living, etc.—TJ’s connection with one of the woman’s friends led us to talk about growing up and first kisses. This ended with the group going around the table showing each other the Facebook profiles of everyone’s first kiss. Dana, I haven’t talked to you since 9th grade, but if you read this, I hope you’re well! It was a great kiss…or at least a good story…

Activity of the night: Karaoke. We led ourselves on a terrible bar crawl of Chicago, desperately searching for a band or sound system to sing in front of. Finally, after two bars with karaoke nights that ‘were cancelled years ago’, we settled on a dive that nobody had ever heard of in a neighborhood that nobody had ever been to. They had karaoke; we sang at least one ’N Sync song together.

Topic of conversation: Religion and politics. After an uncomfortable start to the date dominated by politics, someone (me) made a bad joke about topics that you’re not supposed to discuss on a first date.

Obviously, this was the perfect transition into a conversation about religion. This would have been fine except for the fact that the three men were Jewish and the three women were Catholic and had very little interest in meeting Jews. We only moved on from this topic when my friend James (who frowns upon small talk) tried to get to know the women by asking them to ”describe their relationship with their father” … a question that was met with a deep, uncomfortable silence.

Activity of the night: Leaving. Although the women were nice and the drinks refreshing, when the conversation on a group date leads someone to remark, “I really wish Jews had horns, there are so many uses for them!” you know it’s time to get out of there.

Setting/Situation: Grouper attempt #2 with James and Martin. Braving a snowstorm (#Nemo) to meet a group of women—who also had a non-ideal first Grouper experience—at a bar in Wicker Park.

Topic of conversation: Music (Taylor Swift and EDM.) Careers (consulting, accounting, and being a bottle service hostess.) A game of two truths and a lie. And after round 3 or 4, an argument broke out about an Economist article, foreign governments, and the 2012 Corruption index.

Activity of the night: Tacos. One of the women suggested we continue the night at a local taco restaurant/bar. Without a single objection we made our way to a great Chicago institution where we realized we were more intoxicated than we had thought and proceeded to order plate after plate of the world’s most amazing tacos.

“Have you been on a Grouper?” is really just a signal

All we’re really asking is for acknowledgement of the fact that, yes we’re in this funny, awkward thing called dating together.

And yes, it’s funny that we had a company set this up. And yes, it’s a bit strange that we’re comfortable connecting with people online but slower to pick up the phone.

And yes, this isn’t how our grandparents might have envisioned a first date (if this is even a date).

But we’re in this together and the first drink is paid for, so let’s make it a good night.

(…At least we didn’t meet on Tinder.)

This article originally appeared on A Brewing Thought